How Can We Help?
< All Topics
Print

The FIT February Challenge was for sure a challenge, I was only able to get in about 8 sessions, mostly due to catching the flu toward the end of the month. Here is my take on the challenge itself as well as some of my results.

The first week I was able to get in 2 intense sessions. I had recently been transitioning to a more healthy lifestyle, slowly lowering my sugar, caffeine, and nicotine intake. So my body was sort of going through a multitude of shocks during this first week. I was unable to complete a full 1 hour session both times I went, due to the amount of heat causing me to not feel so well. My heart raced like crazy, I could literally feel the blood pumping extremely hard through my body during the last parts of the sessions.

After getting out it was like I had just run for miles, there was a large amount of sweat, I was exhausted, but shortly after I could feel my heart calming back down. After a short while I began to feel more refreshed and had an overall sense of calm. I chatted with my doctor about doing the FIT Bodywrap sessions and explained the sick feelings I was having, he said that because for so many years I had been living a unhealthy lifestyle accompanied with high blood pressure and high cholesterol, that this would be normal. He mentioned that continuing to make lifestyle changes along with infrared sessions, my body would begin to balance back out, and the sick feelings will stop.

As I continued to do my sessions I could tell that my body was adapting, and a lot of changes were going on. I felt better, my aches were all gone, muscle soreness was gone, energy levels were going up, I could focus so much better, multitasking became easier, and I just felt great. The sick feelings toward the end of my sessions was also subsiding which was great. I kept monitoring my blood pressure and was noticing over the course of the first 3 weeks that it was for sure going down, which was amazing. My chest pains were fading. My sleep was also starting to normalize; before the challenge it was very difficult to wake up and I always felt so drained even after a full night’s sleep. 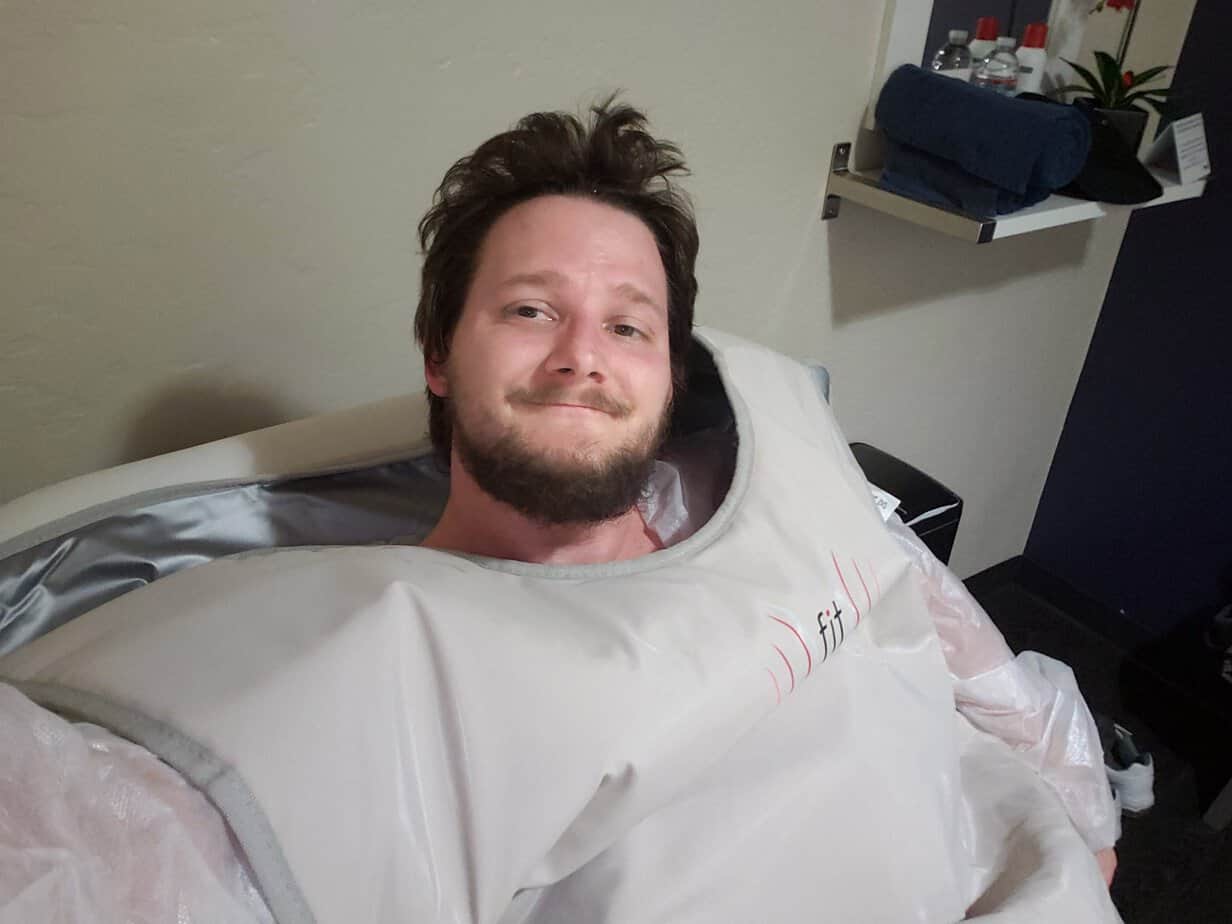 When we got to the middle of the month I had already started a yoga program and doing exercises to help strengthen my knees and ankles. I noticed a reduction in all of my upper body but an increase in my legs, which was not bad since I was working them more than anything, so I was satisfied at that point. My energy was amazing, I could enjoy playing with my son without the fear of getting exhausted quickly. Overall I was beginning to be very pleased and happy with the outcome up to this point.

Toward the end of the month I ended up catching the flu and was out for several days, which is the main reason I was not able to make the 12 sessions in the month. At the end of the challenge, even with doing two sessions per week, I still had better energy, better mood, the sciatic nerve pain in my leg was gone, my hip no longer ached, my shoulder felt great, my flexibility was doing better, my appetite was better and I could tell my metabolism was working better. I was sleeping better and I had inch loss all over which was great.

After seeing my doctor at the end of the challenge for a follow-up visit, I can happily say that my blood pressure, cholesterol, white blood cell counts and my liver levels were all back in the green after being fairly high and at risk for several years. I have been taken off most of my prescriptions since I no longer need them. My doctor recommended that I continue making changes to my diet and overall health and to continue using infrared to help with making me more healthy and active.